What is the Barber’s Sign and What Does it Mean?

The barber’s sign hasn’t changed much over the years. Breakthroughs in lighting effects and computer generated imagery has certainly made it more appealing, but it’s still the same sign that everyone remembers when they need to have a shave or haircut.

In this article, we will explore the bloody history of the barber’s sign. The sign consists of a pole wrapped in swirls of red and white. In the United States, it has the colors red, white and blue. 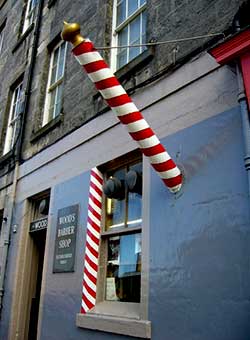 Barber’s pole, Drummond Street Once a common sight, but now a rarity, this shop has retained its barber’s pole, symbolising the white bandages and blood from the time when barber-surgeons performed amputations. Credit: Kim Traynor

Barbers have always had a thing for sharp tools. After all, they needed a sharp razor or a pair of scissors to cut hair effectively. Otherwise, they would end up with no profit and a disgruntled client.

The term, barber was derived from the Latin word, barba, meaning beard. However, barbers have already existed since the creation of razors in the Bronze Age.

In ancient Egypt, they enjoyed high positions because they were the priests and the doctors at that time. In ancient Greece, they were called cureus and were tasked to trim hair, shave beard or cut fingernails. They were commonly found in an agora (market).

The beginning of the Middle Ages (between AD 400 to AD 1499) marked the fall of the Roman Empire. War was prevalent throughout medieval Europe, which also paved the way for barber surgeons. Barbers were expert knife wielders due to their frequent use of sharp razors, so they were tasked to perform surgeries during the war. 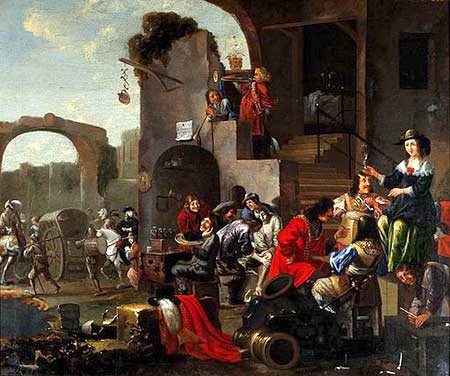 A barber and a surgeon attending to soldiers. Credit: Wellcome Images

Physicians, on the other hand, acted as academics who would put up theories on how surgeries were done. They didn’t want to do the dirty work, so the barber surgeons were the ones who applied their theories. The rule of thumb back then was to take out blood in order to prevent infection or any other diseases from coming into the body. That’s why the use of leeches was also a common practice.

A feldsher performing an amputation.

In peacetime, barbers settled in castles and monasteries. Others traveled from one place to another. Aside from common folks, they also offered their services to the wealthy and to monks who needed to be bald as part of their tradition. Their services varied from cutting hair, shaving beard, bloodletting to pulling teeth. Basically, anyone needing medical attention or a haircut went to the barber. 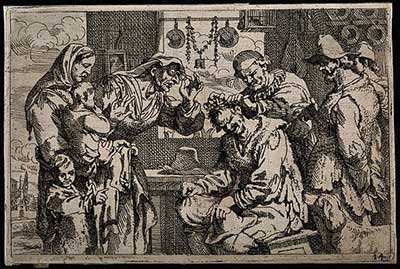 Barbers eventually set up shop in marketplaces. They would often hang bandages on poles outside the establishment after surgery or tooth extraction. The landmark was so familiar that it became the barber’s sign that we all know today.

The early barber sign was a barber pole with blood-filled bandages wrapped around it. The pole was reportedly used by the patient to expose the veins. The barber would then create an incision on the part where the vein is clearly seen. White represents the bandage while red represents the blood. The swirl on the barber’s sign is perhaps due to the wind causing the bandages to twirl around the pole. In many parts of North America, blue was added, which was thought to represent the veins.

It wasn’t until the mid-1700’s that an initiative was launched to distinguish surgeons from barbers. We now know what happened afterwards, i.e. barbers went on to cut hair and were prohibited from performing any kind of surgery while surgeons held the exclusive license to perform surgery.

The barber sign continues to be an icon of a modest profession that dates as far back as the Bronze Age. 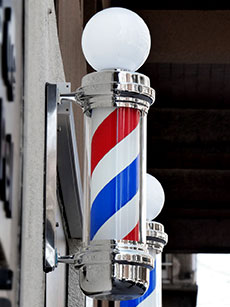 Over the years, the barber sign turned into a lighting spectacle. Some of the most intricate ones include animations from an LED billboard. Even so, the idea remained the same as it was during the Middle Ages. The sign still shows a stripe of red and white or red, white and blue spinning endlessly.